At the end of the year 2012, IG Architektur was commissioned by MA 50 to plan and realise an event / research study entitled „HIGH LIFE: Das Hochhaus als urbane Wohnform“ (The Residential High-Rise as Urban Habitat). The project was based on a contract settlement at a meeting on November 13th, 2012, at the city council office (Michael Ludwig, Executive City Councillor for Housing and Urban Renewal).

The event was planned by a research and editorial team consisting of IG Architektur members, who consecutively met six times. One result was the preliminary fixing of parameters in terms of content, distinguished by the following topics:

Given the tight time schedule, experts on the topics mentioned above were invited at the end of 2012. In January 2013, positive answers were received by:

After this confirmation, three additional working sessions were held concerning the content-related run of the event. Furthermore, the experts were briefed (orally and in writing).
The event itself took place on March 5th, 2013 (2 pm to 6 pm) in the Architekturzentrum Wien, utilizing its main hall, and was part of the Vienna Housing Research Days 2013 (Wiener Wohnbaufestwochen). The symposium was attended by a total of approx. 220 people. 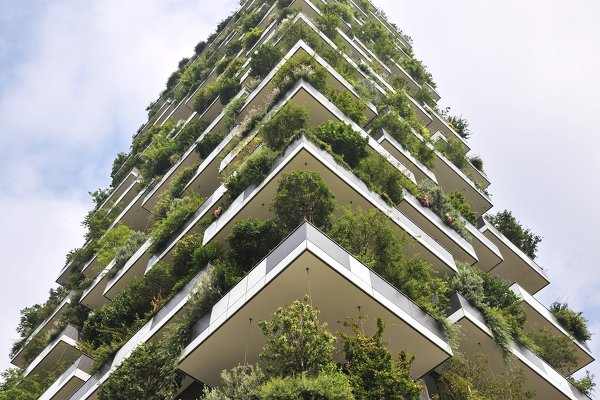 The first example of such a building is currently under construction in Milan in Porta Nuova Isola area, part of a larger redevelopment project with two towers of 80 metres and 112 metres height respectively, and 480 big and medium sized trees, 250 small sized trees, 11.000 groundcover plants and 5.000 shrubs (the equivalent of a hectare of forest). The Vertical Forest has at its heart a concept of architecture which demineralises urban areas and uses the changing shape and form of leaves for its facades, and thus hands over to vegetation itself the task of absorbing the dust in the air, and of creating an adequate micro-climate in order to filter out the sunlight. This is a kind of biological architecture, which refuses to adopt a strictly technological and mechanical approach to environmental sustainability.

Jean - Philippe Vassal - Residential High-Rise & Building Expansion / Refurbishment
The second presentation addressed the cautious handling of existing high-rise structures, their upgrade, and their development potential in Paris.
According to Jean-Philippe Vassal, inhabiting, beyond the functional, conveys pleasure, generosity, the freedom to occupy a space. Designing architecture on the basis of the notion of inhabiting amounts to constructing space from the inside, and not from the outside, as in an exterior and distanced act. The space for living must be generous, comfortable, adaptable, flexible, luxurious and affordable. The dwelling must offer the inhabitants opportunities to move around, to appropriate space, freedoms of usage to generate possibilities for evolution and interpretation. To standard space must be added, within the same budget, its double, that will provide more freedom and pleasure and will also make it possible to intelligently control climatic comfort. An apartment must acquire the same qualities of freedom and comfort as an individual home; there must be the equivalent of a garden on every floor, so that you can go from indoors to outdoors. The concept of "villas" "superposed houses with gardens", in a dense urban context must be revisited and developed widely. The increase in density of certain parts of the city is necessary. It permits the generous dilation of individual living spaces, a welcome for new inhabitants, the proximity and reduction of distances and commuting times, the multiplication of possibilities, services, leisure activities, facilities. The buildings are superimposed, interwoven, added to each other, touching each other with very great precision. Floors are multiplied.
Increasing density does not mean compressing but providing more space and possibilities to each individual on a reduced territory. All this applies for new housing, but also in the transformation and improvement of existing buildings.

Wiel Arets - Residential High-Rise & Urbanistic Emphasis
The third presentation addressed the potential urbanistic performance of residential high-rise buildings in a Rotterdam based project.
Wiel Arets is interested in the interdependency of a building and the city, in how one changes the other, and what effects the facade and the programme of a building have on a city. When speaking of an urban habitat, Arets stresses the setting as the fundamental aspect of a city.
While comparing international major cities, Arets tries to rethink the metropolis. The world closes ranks, and thus brings up questions concerning scale, and the dynamics of our changing requirements, as well as the consequences of technologic innovations on a global scale. According to Arets, the future will prefer structural diversity compared to consistency.
The interdependency of city, buildings, and programmes is essentially influenced by the fact that a building is tied to a specific location. The great importance attached to the ground floor and its correlation with its surroundings is the same as to the iconic character of a high-rise building. For Arets the facade is rather the result of the surrounding terms such as wind and acoustics than of purely aesthetic considerations.
Besides the ecological and technological challenges of zero-energy buildings, the hybridisation of the programme takes centre stage. Not only are mono-programmatic buildings to be avoided, Arets deems them as downright worrying. It is considered as fatuous in principle that a building could fulfil any imaginable request, nevertheless it should be possible to live in a building long-term, short-term, with a lot of space or only a little space, to work there or to spend one’s spare time there - the buildings could still be adequately utilisable in 50 years time due to their programmatic flexibility.

George Wagner - Residential High-Rise & Urbanity
The last presentation examined the performance of residential high-rise buildings from a collective urbanistic perspective, using Vancouver as an example. Vancouver as best practice example seems particularly interesting because of its high ranking in the Mercer Quality of Living Survey of certain metropolises (that placed Vienna first, in 2010 and 2012, and puts Vancouver within the first five cities), though its urban fabric is more heavily based on residential high-rise.

Important aspects of the subsequent discussion
Proposals for topics and solutions for a new metropolis were discussed. The constant population increase is attended by a decline of nature and landscape; this problem is further aggravated by uncontrolled development and the extension of traffic related infrastructure.
Arets thinks Tokyo an excellent example for an efficient neighbourhood and mutual respect in a megacity.
Especially Arets and Vassal advocated affordable housing for all income levels.
Ceiling heights of three metres facilitate a flexible utilisation, thus enabling a long-term inhabitation of these buildings. It would be highly uneconomic to provide less than these three metres. In the Netherlands, 1.900.000 sqm. of living space stay vacant, because of its low ceiling height, and the impossibility to use the rooms in a flexible way.
Mono programmes in residential architecture seem highly problematic due to their basic structure aiming only at one specific utilisation. On account of interconnecting residential housing with communal areas, synergies with the public authority could be developed, and thus the expenses could be shared. This in turn could have a beneficial impact on rental and purchasing prices.
It was discussed as a principle to plan less singular projects that are non-interacting with their surroundings. A lot of facilities should be easily accessible on foot. Economic consumption is no longer a current and future attractor, given that most things are available via internet now. Increasingly important for a city will be the element of education.
According to the discussion, Vancouver should not be cited as an example for a successful high-rise city. In fact, questions should be asked such as “What do the people of Vienna want, and how do they want to live?”
Facts